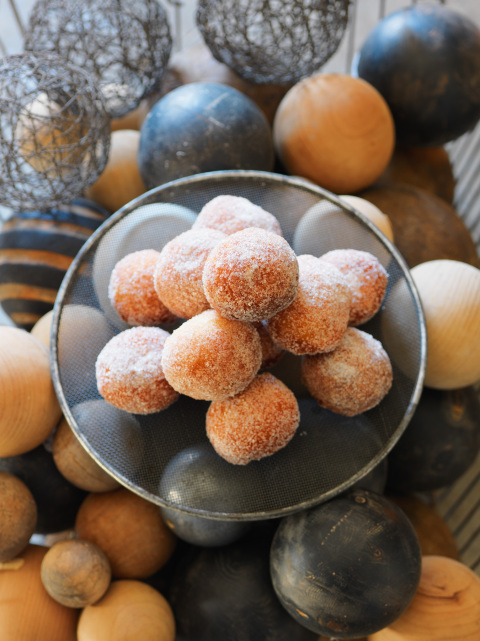 Mix together the flour, salt and grated lemon peel in a bowl. Melt the butter in a small pan and add the milk, stir in the sugar and yeast and allow them to dissolve. Add the egg and the milk mixture to the flour and quickly knead the mixture to a soft dough. Cover and leave to stand until it doubles in volume; this will take 1 to 2 hours

Cut the dough into 20 g portions, form them into balls and lay them on a pre-floured sheet of baking paper. Cover the balls and allow them to stand for a further 30 to 40 minutes until they have doubled in volume

Heat up the oil in the deep fryer or a frying pan. When a medium heat has been reached, fry the doughnuts in portions for up 6 to 8 minutes, turning them regularly, until they are a light brown in colour. Remove the cooked doughnuts from the oil using a wire ladle, allow them to drain well and allow them to cool on a kitchen grid covered in kitchen paper

Enjoy the doughnuts on the day they are cooked. Serve the doughnuts according to your own taste filling them with a chocolate/nut/cream sauce, lemon curd or a "dulce de leche" thickened milk cream. Preparation without the use of an icing bag: Roll out the dough until it is between 7 and 8 mm thick. Cut out discs of 6 to 8 cm diameter and spread one half of each disc with a teaspoon of jam. Brush the edge of the discs with a little whipped egg white and lay a second disc on top; press the edges firmly together. Allow the dough to rise again and then bake: see above