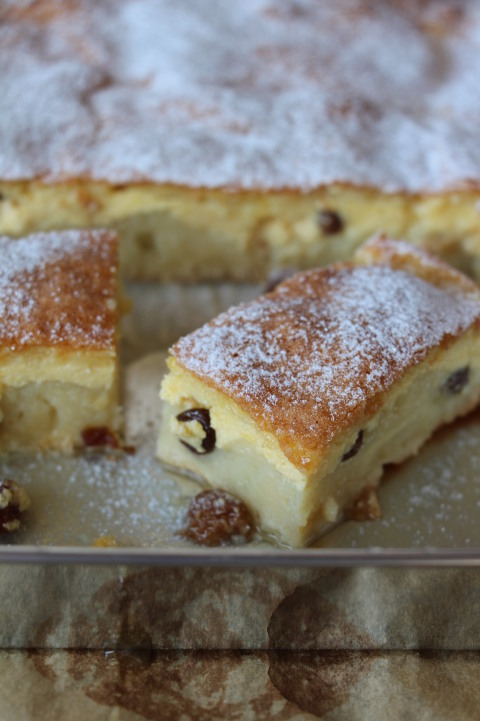 Dough: Mix together the flour, sugar and salt. Stir in the yeast, milk, egg and butter and knead the mixture to form a soft dough. Cover the bowl and leave it to stand at room temperature until the dough has doubled in volume.

Topping: Mix the vanilla pudding powder with the milk and cook as instructed on the packet; allow to cool. Put the raisins in water, cover the bowl and soak until they are soft. Stir the pudding until it is smooth and then mix in the quark and softened raisins.

Spread the dough flat in the buttered, baking-paper-lined baking tray. Cover the tray and leave the dough to rise for a further 30-60 minutes.

Spread the vanilla pudding and raisin topping evenly over the yeast dough base, place in the fridge to cool.

Bake for 35-40 minutes in the lower half of an oven preheated to 180°C. Remove the "eierschecke" (layer cake) from the oven, allow to cool and then cut into squares and sprinkle with icing sugar before serving.